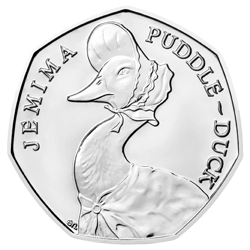 The Royal Mint is honouring Beatrix Potter with a series of 50p coins and this Jemima Puddle-Duck 50p is the third release.

‘The Tale of Jemima Puddle-Duck’ features a domestic duck, named Jemima, whose character is featured on this 50p coin.

Designed by Emma Noble, Jemima Puddle-Duck is instantly recognisable in the centre of the coin.