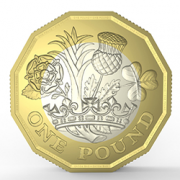 Britain’s new £1 coin with the symbols of England, Scotland, Wales and Northern Ireland goes into circulation from Tuesday on the eve of the launch of a Brexit process that has put national unity in doubt.

The 12-sided coin is the first change to the shape of the £1 coin since its introduction in 1983.
Britain’s finance ministry said the new coin would be “the most secure of its kind in the world” to prevent a rise in counterfeits.

About three per cent of the current round-shaped coins are fakes.